How not to be famous 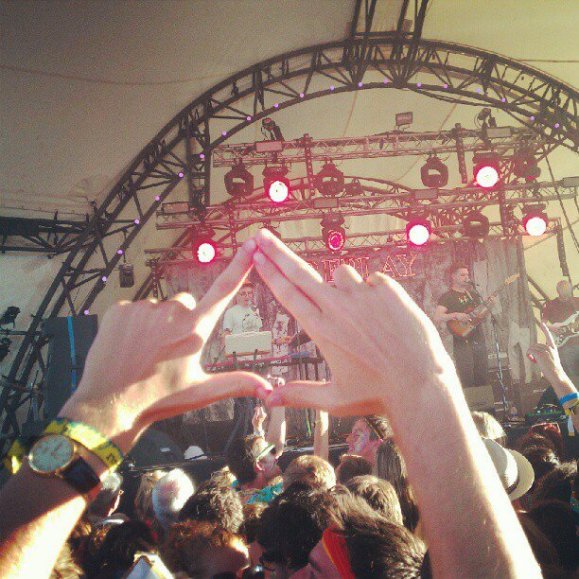 There was a peculiar aura around the Festival Republic stage.  The crowd stretched out all the way outside and triangles constructed of dirty fingers graced the air. As the crowd began to demand that the sacred band took to the stage a chant of “Alt-J, Alt-J” broke out. The atmosphere was electric and somewhat surreal as moments of silence brought more eerie triangles to the sky.  Even not being an Alt J fan, and to a certain extent actively disliking the band, I was caught up in the occasion. I sure as hell was ready to tessellate.

And then, a few skinny, spotty, spectacled teenagers nervously wandered onto the stage to remind us all that they were indeed human.  This, I understand, is part of their charm, and to a certain level it is endearing to see a few regular Joe’s on stage. But when the event is approached with such expectation, you want to see a fucking good show, and these guys were just too shy.

Nervously the lead singer mumbles into the microphone that they didn’t expect so many people, and to be fair they weren’t lying, they clearly didn’t expect it. They were embarrassed. The band did nothing more than attempt to recreate the sound on the record, they didn’t move about the stage, get the crowd involved or really act like they even wanted to be there.  You felt yourself willing them to get through the set, rather than dancing like a madman in the tiny bit of space you had found for yourself in the packed tent.

Pop-rock-indie-whateveryouwanttocallthem stars nowadays, seem to be embarrassed about fame. Alt J could barely cope with the hype that surrounded them, and neither, it seems can the Vaccines.  Their new album, while having a few strong moments like the closing track Lonely World, is a confused mess, with at the heart the problems Justin has with being famous. While songs on the first album made no real sense like “Wetsuit”, somehow singing that nonsense felt so right, but singing “I’m no teenage icon, I’m no Frankie Avalon” just doesn’t click. It’s just there’s no way we can relate to it. There’s a certain energy in the first album which seems to have gone, and now we have some twenty-something men wishing they were women.

We need more bands like Tribes.  Tribes just sing it like they fucking mean it and have a good time, and guess what, if they have a good time, we have good time too. They were probably one of the best bands at Reading.  They strode on to the stage and played their music loud and jumped about and had a good time and the crowd responded like a crowd should. If you’re going to be a musician, don’t be afraid of it, go up on the stage and declare yourself to be the best.

The sooner bands stop trying to be original and deep, and instead just sing what they want and how they want, the better. Bands like The Black Keys, Tribes, Alabama Shakes, hell…. The Palma Violets (if you don’t know them check them out) completely get this. And I hope more do too, soon.

3 thoughts on “How not to be famous”