It would be easy to dismiss this album. Just another female singer-songwriter with an acoustic guitar and a nice voice, playing radio-friendly, late afternoon coffee shop music, ready to be forgotten by the end of the month. But what actually emerges deserves comparison with another, similarly situated singer, Lianne La Havas. Like La Havas, Rose has been well supported by radio plays, and widely known for a long time before her album was even announed. For La Havas this was thanks to a show-stealing performance on Jools Holland, while Rose has honed her trade working with Bombay Bicycle Club, first on Flaws and then throughout A Different Kind of Fix. But unlike La Havas’ album, which was overwrought and less impressive than her Jools performance, Like I Used To is well structured and entertaining enough to warrant immediate second playthroughs and definitely removes her from the shadow of BBC.

Whether or not you will like this album depends pretty much entirely on whether you like Lucy Rose’s voice. Somewhere between Laura Marling and BBC frontman Jack Steadman, it warbles delicately over the top of acoustic guitar lines, and while being bit, yes, twee, it is very effective and carries the songs well. She apparently sells tea at her live shows, which will for some be a sort of ‘I told you so’ revelation, and there is definitely something provincial in the album, which, combined with the fact the album was recorded at her home and village hall, gives the record an sort of homely feel to it. What saves it from being just that dreaded put down of the critic – ‘nice’ – is the songwriting. Take lead single ‘Lines’, what could be a simple, delicate ballad becomes a fascinating song, with syncopated guitar parts and an unexpected gear shift into the chorus and then a shift up again for a rousing bridge. To top it all off the verse is in 7/4 which to my drummers ears is confirmation of a talent beyond what could have been her pigeonhole, and singles her out among acoustic artists, just as BBC’s 10/4 ‘Emergency Contraception Blues’ put them a foot above the standard indie plodder.

The flow of the album is something Rose has got perfectly right. There are just the right amount of songs so that the album never becomes boring, and each tender moment is countered by something more upbeat to prevent it being too samey. Songs like ‘Night Bus‘ and ‘Middle of the Road‘ show off Rose’s ability to write moving songs, while ‘Bikes’ and ‘Watch Over‘ provide the album with its happier, poppier moments, the latter containing little hints of Steadman’s Bombay stylings that will please fans crossing over between the two. Thankfully, this is the only moment reminding us of the connection. The overall theme of the album seems to be the past and adolescence. This is hinted at by the title, and album closer ‘Be Alright’ is be a brilliant moment where Rose effectively closes off this topic. Lyrically it reflects on love and relationships as you would probably expect, and it does it well, there’s never a grating lyric like many youthful acoustic bands suffer from.

As a debut this is highly promising. At its best it recalls the better folk/pop artists of the past in Joni Mitchell, Neil Young and even occasionally Cat Power. It isn’t without its Flaws (teehee its a reference), the variation is mostly contained as parts within each song, and it would be nicer to have one track where the sound is more experimental, although that was what became a major problem with the La Havas album. The album tracks have yet to really stand out from the singles and this could be a problem, but only time can tell as any one of them could be my favourite song by next week for all I know. What annoys me more is that like La Havas’ album it has a rubbish cover that does the music a disservice, but whatever. 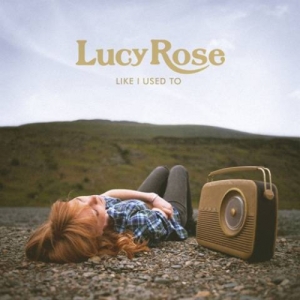 While its critics might dismiss Like I Used To as the latest in a line of forgettable nu-folk, in reality it is a surprisingly strong record showing off a musical ability far beyond many of her peers, and deserving of repeated plays. The standout track by a country mile is track no. 4, ‘Shiver’. Anyone who fails to be moved by it has to be one cold-hearted bastard, one look at the long line of youtube cover versions will tell you of its instant appeal.

I am indebted to her performance for Chris ‘The Hawk’ Hawkins on 6music at the ungodly hours of the morning for finally persuading me to get the album after a week or so of appreciating the singles. It’s well worth checking out here (there’s only 1 day left so hurry).

One thought on “Lucy Rose – Like I Used To – Review”