For Christmas this year I asked for the DVDs of my two favourite films of the past 18 months or so: Prometheus and the US version of The Girl With The Dragon Tattoo. I got Prometheus, we all watched it (again), we all loved it. However, I didn’t get the latter. Hm. This little disappointment has been lost in my cheese and chutney coma as we sit in a beery fug on Boxing Day watching the original Swedish film and I have decided that as a special Christmas treat for y’all I shall compare the two versions of ‘The Feel-Bad Movie of Christmas’ (smashing tagline).

Now I for one am loving TV’s obsession with Scandinavia at the moment. Shows like Borgen, The Killing and The Bridge have topped ratings and viewings both here in Albion and also Stateside resulting in US re-makes, like with the Milennium trilogy. Cities like Stockholm and Copenhagen are the place to be seen if you’re young, creative and dedicated to tofu. If you want to immerse yourself in sleeve tattoos and beards in beanies sipping locally-brewed ale, head on down to Vesterbro district in Copenhagen my friends. So while a large part of the English-speaking world, and certainly myself, is in love with all things Scandi-chic I must admit that, for me, the American re-make of TGWTDT surpasses the original. Here’s why:

In Noomi Rapace, we have this small, obscure punk-Goth who can quite clearly kick some serious ass and this effect rolls right off her razor-sharp cheekbones. We see very little vulnerability to Rapace’s Salander. Petite and compact though she is, when we see her body it is solid and honed muscle. (Her dragon tattoo beats out Rooney Mara’s though, I must admit). In terms of Mikael Blomkvist, the pockmarked and seemingly more blundering Michael Nyqvist doesn’t strike the same chord as Daniel Craig’s. This is more in accordance with the book and as I personally don’t have the hots for Daniel Craig I thought his injection of Hollywood heartthrob into the film was perhaps a bit unnecessary. This aside, the whole film in general doesn’t quite have the artistic flair found in the US version. In true straight-forward Scandinavian style the film plods from scene to scene, hardly taking the time for lingering head-shots or shifty gazes, or take in the slick background of Stockholm in the first 20 or so minutes of the film. In contrast, the US update with the godsend that is David Fincher as director has the camera moving through the scenes like a silent shark, picking up every eyebrow twitch and grimacing snarl. Even the sun-drenched, summery memory scenes of Harriet’s disappearance have a fluid menace to them. This is why Fincher was the perfect director for this film. With Se7en, Fight Club and most recently The Social Network under his belt, Fincher has made his mark as an auteur in film by developing that great knack of eeking out the nastiness that lurks beneath the surface in everyone. For me, having Fincher at the helm of this film is what tipped it as the better of the two versions.

As previously mentioned, Noomi Rapace is badass and we see her potential for ass-kicking right from the off in the 2009 film. But with Rooney Mara we see this elfin, mercurial cyber-Punk who looks too frail to ever even pinch anyone, let alone punch them and overpower them while going up an escalator. This is why when she gets her revenge on the revolting Nils Bjurman it manages to show with even more fervour just how mentally unsettled Salander really is, again Fincher’s brilliant technique of shifting the murky waters of his characters’ personalities The film in general seems to really show the dreadful bleakness of the storyline, in every aspect. The title sequence drowning in oily technological violence with the electrifying, crackling cover of Immigrant’s Song kicks things off with more panache. The supporting cast are well-chosen and eclectic (look out for theatre darling Steven Berkoff as Henrik Vanger’s lawyer Frode). Mara and Craig have far better chemistry. The cinematography and greyed light, as well as the small change of the whole film taking place in the bleak midwinter rather than changing seasons adds to the harsh cruelty of the film and means that we see how Hollywood’s big-budget artistic touch has enhanced rather than flattened this re-make. I often disagree with American re-makes, not least with the recent remake of the bleakly beautiful Swedish vampire film Let The Right One In. It seems as though films with a more delicate, art-house touch are best left to be appreciated without a Hollywood helping hand. But this remake was something else, and for me Rooney Mara stole the show, well deserving her Oscar nomination.

So there it is. My special festive review of two not very festive films. I leave you with some fan art I found on the internet to seal my obsession with Rooney Mara. You stay classy, Internet users. ♥ 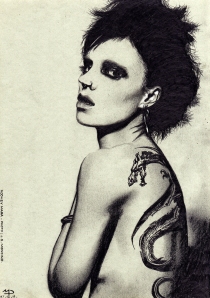