There’s nothing quite like going to a gig on your own. Standing at the back, scribbling illegible notes into a tiny notebook while people in their groups of friends give you weird looks. This is the situation I was in at tonight’s gig at The Railway, Winchester, prompted to go see four bands I’ve never heard, Dolomite Minor, The Reduntants, The Red Sky Experiment and Underplay.

I was stopped from going into the gig by what I can only describe as a fucking massive crowd queuing outside the entrance for the gig at 7.30. This was one hell of a well organised show. On entry (being one of the few there who was actually old enough) I managed to buy a beer, forget I’d bought a beer, buy another beer and look like a muppet. Luckily to cheer me up there was The Psychic DJ. That’s not his real name, apparently it’s Jamie Simkin, but just as I thought, ‘man, I’d really like to hear some TNGHT in this mix’, he drops their ‘Higher Ground’ in the midst of a set of great dance music, and it goes down as well as a track that sick should – pretty damn well. He closed his set by playing the song I assume is known as ‘Slip Slop Bop’, I’d heard rumours, but it really is something else, something else entirely. To follow was Simeon Leeder, whose set was far more heavily Drum’n’Bass influenced, and as a man standing all alone at the back I couldn’t quite join in the rapid rave developing by the front of the stage.

When the DJs subsided it was time for band no.1 a threepiece, the cautiously named Underplay. The singer/bassist, Dave, looked like a shy young Paul Weller, but most of the attention was on the dapper guitarist ‘Charlie’ whose name was on the lips of most of the crowd, most of the time. This was not underserved as his guitar playing was clearly awesome. As they started, though, I couldn’t help but wish someone had locked them in a practise room for five hours the day before. The songs they had were impressively good, I could here a brit rock influence from The Jam to The Arctic Monkeys, but the first couple songs absolutely needed to be tighter. For a new band I would’ve also liked to see a bit more aggression and conviction, bands need to believe in what they’re playing and show it off like it’s the best thing ever, because people want to believe that it is. For all these doubts, the standard young band complaints, they then proceeded to make me look stupid for the second time that night, by busting out a cover of The Kinks’ ‘All Day and All of the Night’ which fucking rocked. It had everything I was looking for in the opening songs, the confidence, the aggression and the passion. To top it off, the obviously a legend guitarist ‘Charlie’ made the audience cream their pants when, in the midst of a solo, he lifted his guitar up and played the strings with his tongue. They didn’t let up, and closed their set with a song that had a cracking bass riff, ‘The Stalker Song’, and a classic reprise led by a frantic ‘1, 2, 3, 4’. It was good stuff, and if they tighten up the first half, and get every song as energetic at the Kinks cover, they could be a great prospect to see on the local circuit. 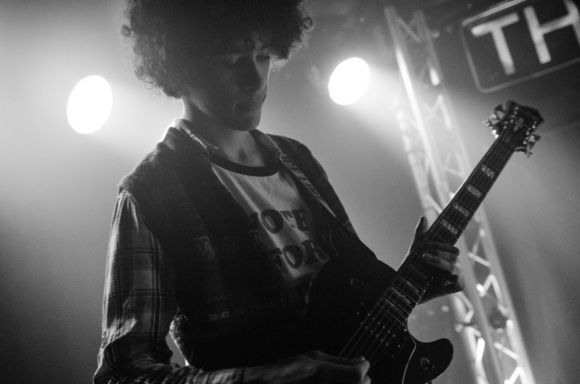 Hugh from The Red Sky Experiment – photo by Julian Ellis-Brown

With little time to spare inbetween bands, the group that really organised the whole night, The Red Sky Experiment took to the stage. It’s very rare that I go to a local gig and am in awe of a band, but fuck me, could they play. As a drummer I can only worship at the feet of the stickman behind the set, the first song was an insane jazz-rock track that was begging to turn into 7/8 but always held back in no small part thanks to this drummer’s phenomenal tightness. Launching into Bombay Bicycle Club’s ‘Always Like This’ the band actually managed to out funk one of the funkier indie rock bands around, their energy and chemistry were something else. They had two vocalists sharing duties, with dual guitars and a bass, and they used this sound so well, holding back when they needed to and cutting loose only when it was ready to explode, especially in an incendiary cover of Hendrix’s ‘Foxy Lady’ which was every bit as dirty and groovy as the original. Doubtless if you’re reading this, you can’t wait to hear them for yourself, in which case I have some bad news. This was their last gig ever, the end of the experiment, and trust me, no one is more annoyed than I am about this. Deciding to capitalise on this sadness, they closed their last ever set with a cover of Coldplay’s ‘The Scientist’ which was even complete with various lighters going into the air for a very emotional end. It was an epic end to a band I really wish weren’t calling it a day, but nevertheless I’m sure all the members will go on to be successful in future projects. Especially that drummer…

Next up was the band I’d technically come to see, but didn’t really know, The Reduntants, who were launching their new sound, a beefed up one with extra organ power. Deciding to start their set in total darkness was a clever atmospheric move, and as singer Matt’s vocals filtered across the Jeff Buckley influence was clear to hear. But just in case anyone thought they were gonna get moody noodly songs the band launch into a raucous rock attack, fusing Red Hot Chili Peppers riffs and psychadelic rock swirls. Having never heard their previous sound I can’t say how much has changed but I can say that they fully utilised all the sounds at their dispersal, whether it was sharp funky stabs, or Pixies-esque quiet bits before a wall of attack. Elements of Arctic Monkeys and Jamie T kept them from being any sort of retro throwback, but the defining feeling their set gave can pretty much be summed up by the word Groovy. The crowd that clustered around the stage rocked out at every moment available and the rhythms of every track were impossible to resist. The set was let down, however, by a somewhat funky reworking of Radiohead’s indomitable ‘High and Dry’, mainly because I think that song’s been done to death by various pop reworkings from people who would find Kid A unlistenable, but also because it felt like an innapropriate song for this band to play. They had played with swagger and cool, and the cover took them on an unnecessary turn into the melodromatic. But after declaring they would have a new EP out by Christmas, they managed to make up for it, ending on a song which absolutely plundered The Doors, especially ‘Soul Kitchen’ but managed to have a monster groove to finish with. It was a great performance and we’ll have to see in December if they can capture the grooviness and the energy that made it work for their upcoming release. Watch this space.

Finally, with the threat of my lift home lumbering on the horizon, the final band, the headliners, Dolomite Minor, offered up their self-proclaimed ‘Raw, Dirty Blues’. Personally, I reckon they had a little bit more about them than that, with occasional straying into punk, rock and grunge, but they did always return back to a dirty blues sound. Being that most fashionable of bands, the two-piece they continue in a great line of bands with formidable hard-rocking chemistry from The Black Keys and Blood Red Shoes to The White Stripes and Japandroids. Guitarist/Vocalist Joe was clearly adept at guitar, his one instrument gave out a phenomenal sound that declared bassists everywhere useless, while drummer Max was the powerhouse anchor, and a Dave Grohl-esque beast at the most climactic moments. They also manage to fuse together the long-haired grunge look with a chic afro between them, which is no small feat. The set was solid with each song having its own distinctive character and tone. At one point an almost Franz Ferdinand riff hinted at a potential commercial single, coated in a characteristic rock’n’roll boogie that suggested they could take lessons from similarly old-school styled band The Jim Jones Revue. I was unfortunately forced to leave due to my inability to drive, but as luck would have it two days later at an unbelievable Palma Violets gig at The Joiners I encountered Dolomite Minor as the support band, and got to hear what the close of their set can sound like – Raw, Dirty Blues. 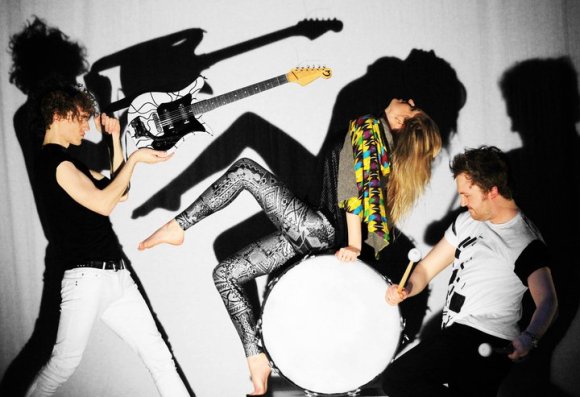 I first caught Arp Attack at the Road to Blissfields – Winchester, where they were the teaser for what kind of talent Blissfields held in store. I made the foolish mistake of not purchasing then single Follow The Rhythm, but I’ve been saved by the release last week of their EP Devil’s Drop that is quite rightly acquiring plaudits across the blogosphere, recently being picked up by BBC 6Music DJ Tom Robinson’s fresh faves. For a band that has already played with the likes of Delphic, Too Door Cinema Club and Everything Everything, its the next step in a very promising career.

It’s a musical fusion of pop at its catchiest with jagged and fucky electronica. Singer Frankie Murdoch is both a force to be reckoned with live and a vocalist of great range on record. Drummer Kev keeps things pumping along with a fusion of acoustic drums and electric beats while guitar/synth man Chris earns their name with his layered parts.

The EP opens with a pop-hit in Amnesty. Plucked strings undercut a myriad of guitar, synth and vocal lines as singer Frankie Murdoch offers to ‘throw you an amnesty line’. It’s a great tune, and catchy as hell too, before murky bass brings in Lucky Man, an echoing sprawling track that keeps up the quality. A tinkling bell introduces us to Bicycle which is… a song about a bicycle. It somehow manages to avoid the ridiculous and actually becomes quite a funky song. That all leads into title track and key song Devil’s Drop at the end of the four-track EP.

All-in-all this is a more than convincing release from the group, proving that they are a band destined for success, expect to be hearing tunes for this invading your radio soon. It’s pop at its most inventive and raucous and not a million miles from personal favourite AlunaGeorge, although where that is more DJ based, Arp Attack still retain that core feeling of a band sparring off each other, coolly and confidently. It’s a cracking release and well worth the investment, as you get a killer remix of the title track bundled in too. Click the artwork to go to the band’s bandcamp page where you can buy the CD, or follow the links from the above soundcloud stream or just get it from iTunes.