Well, this was only ever gonna go one way, wasn’t it.

Tom Williams and the Boat return after making what was my album of 2011, with the ingeniously titled Teenage Blood. Now I’m not going to pretend that I’m not a complete fanatic when it comes to this band, but I’ll try and give my fair view of the album.

The Boat have grown up. With Tom’s voice dropping a few tones, the band have got darker and angrier. And of course, they’ve got better. but rather than get old and cynical, this album goes straight for the adolescent. It’s a journey through the pains and the joys of being a teenager – but before you cringe – the genius of the album is to pull this off without being mawkish or melodramatic. Credit has to go to Tom’s lyrics here, they were the standout feature of first album ‘Too Slow’, and here they are the reason that this album theme works at all.

They are a folk band, it has to be said, but they are light years away from the namby-pamby banjo-and-haystack blandness of Mumford and Sons, sounding more like a cross between Neil Young and Arcade Fire, with songs being grounded with acoustic guitar, but the depth coming from electric guitar riffs and a mournful violin over the top. 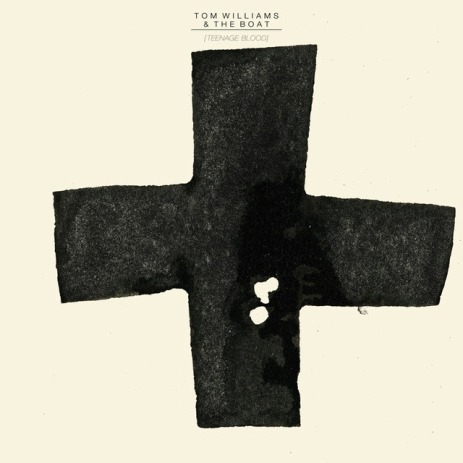 The album roars opens with the title track hitting after four beat shout from Tom himself. Needless to say it’s the most instantly brilliant track on the album, with fantastic lyrics and a quality hook ‘I have (a) teenage blood and a teenage heart / I’d tell you what I can but I don’t know where to start / I’ve started falling apart’. Unfortunately they haven’t released the impending video yet but they do have a pretty good live acoustic version (put it on 720p for the best sound) that is worth checking out.

Elsewhere on the album more weight is given to Ant, the guitarist and it really pays off. His riffs drive the album on and can singlehandedly power whole tracks – particularly in ‘Too Young’ and ‘Trouble With The Truth’, both of which are phenomenal tunes that are a great step up for the band as a whole, musically and lyrically, the former could be a long-lost Strokes B-side, and the latter is a beautifully crafted ballad. Together with ‘Little Bit In Me’ – a trademark super-exaggerated violent track, the type of thing you would see in a serial killer’s diary, that in true Boat style then twists to actually be quite deep – and first single ‘My Bones’, these tracks make up the fist half, and this is defintely an album with two distinct halves.

The first is fairly experimental for the band, and it has the more obvious single type songs (why ‘Too Young’ isn’t the single I have no idea – except that My Bones and Teenage Blood are so good). However, the second half sees a change. The band finally settle into one consistent ‘Tom Williams and the Boat’ sound, and what at first listen might seem a little bit samey, the result is incredible.

All the songs have a consistent sound and the flow together perfectly. We get the return of the Tom-and-his-guitar style song that was a highlight of the first album, in ‘There’s A Stranger’. But the absolute pinnacle of the album is the penultimate song, ‘Summer Drive’. A tight drum beat propels a moving epic of a song, that rises and falls as the song flows. The album then rises to a close with what could be called the only happy song on the album (aside from the joyous ‘Too Young’ where the music is so uplifting yet the lyrics quite sad), ‘Emily’, the story of an angsty youth having a dance with his childhood sweetheart. Ideally I could show you one of those songs, but they are growers, so it wouldn’t do much good. Instead, here’s the original single and video, ‘My Bones’:

Overall the album is a little too brief, and it would’ve been great to have a few more songs, particularly ones of just Tom and a guitar as the two-minute ‘There’s A Stranger’ doesn’t quite satisfy the need for dylanesque acoustic songs. However, the double team of the instant hits of side one, and then the rewarding growers on side two (that have left me restarting from track 6 every time the album ends) works perfectly and show a many-layered band. Specifically, side two shows a band that have finally found a sound they can call their own, and it is awesome.

OK, a confession, even I have to admit, I may be selling this band for more than they actually should be. Part of the joy of music is discovery – it’s why people like different songs – they’re the ones they heard when a certain band ‘clicked’, and my discovery of this band may be colouring myu opinion a bit. So maybe they aren’t the greatest band since The Cure. But they are still bloody good, and all I can do is implore you, if you don’t believe me, if the songs don’t convince you these guys are brilliant, then keep listening, give it time. Because if you do, I can assure you, you will see how incredible these guys can be, and why they will undoubtedly be one of the bands that in a year’s time, everyone will be asking where the came from and how they got so good.

Please, just get the record.