Welcome to a new segment of this shambolic blog that I’m tentatively calling ‘Overanalysis’. The basic premise is that I take a record or an artist and examine their music as far as my brain will let me, trying to draw crazy threads across lyrics, melodies and atmosphere in the hope of finding some extra layer of meaning kind of like in ‘A Beautiful Mind’ but hopefully with a bit less schizophrenia. Obviously it’s only worth doing with truly great albums, and, having just heard their new song ‘Reflektor’, I remembered how Arcade Fire’s The Suburbs was such a vital record. So to satiate my need for their music I decided to start the first Overanalysis here.

Warning: this will be long and this will seem like Bullshit to most of you. Nevertheless, enjoy.

“In the suburbs I / I learned to drive / And you told me we’d never survive / Grab your mother’s keys we’re leaving.” 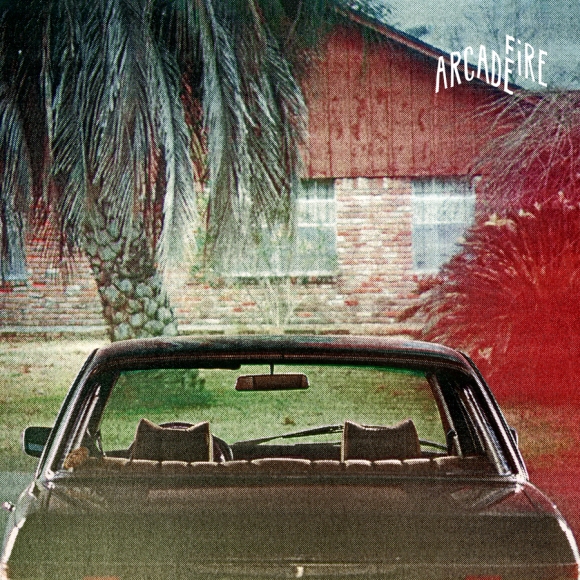 In order to properly look at what’s going on inside The Suburbs, it’s important to look at where Arcade Fire were when they came to make it. Their debut album, Funeral, had become a cult classic and its successor Neon Bible was almost as well received; the band were becoming increasingly popular. They were favourably compared to R.E.M. as a band about to cross over from indie/alternative into mainstream festival headliner fame. This is significant for two reasons, the first being that for those first two albums they were able to be an underground band, songs like ‘Rebellion (Lies)’ and ‘(Antichrist Television Blues)’ are nearly a counter-cultural message for the cool kids: “we can live our misbehaviour”. Approaching album #3 Arcade Fire were now part of the mainstream, no longer simply taking shots from the sidelines. The second significance is that they risked losing the ‘edge’ that made them so precious to these cool kids: they were no longer an indie secret only known by a select few music fans. Both these aspects form a crucial part in the fabric of The Suburbs.

I was not a fan of Arcade Fire until well after The Suburbs came out. Being both lazy and an idiot, I had barely listened to their songs and the few times I did they did nothing for me. By the time I heard it, ‘Wake Up’ had already spawned a million other howled ‘woah’ choruses from dungaree-wearing morons making epic folk rock to sully its magic. ‘Intervention’ seemed too caught up in itself to reach me. But when a good friend finally persuaded me to give ‘Ready To Start’ a listen, I was forced into action. As the kind of person who can be won or lost by lyrics I was struck by hearing a band who could verbalise the contradictions they faced as musicians. “If the businessmen drink my blood / Like the kids in art school said they would / Then I guess I’ll just begin again / You say, ‘can we still be friends?'” Art School, where the great rebellious bands like The Clash and Gang of Four formed and played, fights the businessmen of the music industry of which Arcade Fire were now a part. This is a band literally asking their fans not to abandon them because of their success.

At this point a few people could call out the band as being whiny bastards. How horrible for Arcade Fire, having loads of success with their music, god, it must be awful. And you know what, they’re right… Almost. The next verse looks like it’s a ‘Rebellion (Lies)’-esque swipe at the mainstream from the side again: “All the kids have always known / That the emperor wears no clothes / But they bow down to him anyway / ‘Cause it’s better than being alone.” Haha, isn’t that a hilarious takedown of all these people who listen to crap music, aren’t they all idiots… hang on… what do they mean, ‘better than being alone’? Who is really being sent up here? Is it kids who listen to pop music, or is it the alternative ones, the aforementioned ‘cool kids’ who live for the hype cycle of next band to ‘save music’ only to realise that each one is ‘just a band’… exactly the same conflict crops up again with ‘Rococo’ only two songs later: “they build it up just to burn it back down”. If ‘Ready To Start’ seemed like a daring jab at the fans who got them where they are, then ‘Rococo’ is a one-hit K.O. It’s shamefully clear who ‘the modern kids’ are, who ‘seem wild, but they are so tame’ and ‘will eat right out of your hand, using great big words that they don’t understand.’ If that isn’t the perfect description of the Pitchfork (who gave Funeral a 9.7/10) generation of indie-literate music fans then get off my website.

All of this comes together in ‘Month of May’ a song that directly addresses the idea of ‘making a record’. Ideas about writer’s block (‘Just when I knew what I wanted to say / A violent wind blew the wires away’) and fear (‘sounds like their screaming… the city was hit from above’) mingle with a commentary on, yet again, ‘the kids’. These kids are ‘standing with their arms folded tight’. This is a dual attack on cynicism, both of teenage angst and growing up (more on that later) and also one on people afraid to risk not looking cool. Arcade Fire don’t hate the fans they had that praised them even if the lyrics seem to mock them, they only mock the attitude that says that being first is better, that being popular is bad, that avoiding the mainstream makes you better than those that don’t. The culmination of this comes with the lines: “Some things are pure / some things are right / but the kids are still standing with their arms folded tight… Well I know it’s heavy, I know it ain’t light / but how you gonna lift it with your ARMS! FOLDED! TIGHT!” Just because some things aren’t pure (yes, the Black Eyed Peas suck), doesn’t mean cynicsim is the only response, it’s okay to believe in things, to not be afraid of letting the self go and emotionally connecting with something.

If that idea sounds familiar, you may have read the [gasp] Pitchfork review of Funeral in 2004, which declared: “So long as we’re unable or unwilling to fully recognize the healing aspect of embracing honest emotion in popular music, we will always approach the sincerity of an album like Funeral from a clinical distance…” This is Arcade Fire’s great accomplishment, and it’s what sets the stage for making The Suburbs a modern day Quadrophenia. They reject cynicism and the coolness of hiding from real, honest emotion. They know that they are making a record that their older fans might think of as leaving them behind, so they ask them to put down their facades and elitist outlooks and join them, not for Arcade Fire’s sake, but everyone’s sake.

I once read a far more articulate article than this one that examined how far post-modernism had infected modern culture. Nowadays pop artists like Katy Perry can be obvious and cheap, toy with overtly sexual and sexist marketing while seemingly being in on the joke that it’s crass and blatant. They can hide behind a sheen of ironic detachment to avoid facing serious questions, they know it’s bad but in this post-modernist world bad is allowed and you don’t want to be the guy that takes everything so seriously. But the article explores what happens when this starts to change:

The best way I can describe what I think comes next, in light of postmodernism, is the death of cool. The detachment and aloofness that defined cool are no longer palatable to younger generations. “Whatever,” followed by some glib deconstruction of motives, intent, and meaning, is no longer an acceptable response to an idea or question. Deconstruction is no longer an excuse for inaction or withdrawal.

With The Suburbs, Arcade Fire are reaching out to everyone. Yes, cynicism and detachment protect you from all the crap, but they protect you from truly investing yourself in something. This unhappiness of ‘I would rather be alone / than pretend I feel alright’, the fear that ‘the businessmen [will] drink my blood’ can only be stopped by abandoning cynicism. Better to be be wrong, than live in fear of being ‘uncool’, better to open your mind to big emotions, better to open the door and step out into the light. Now I’m ready to start.